The Ghost Trick Wiki is a comprehensive database and encyclopedia dedicated to Shu Takumi's Ghost Trick: Phantom Detective! We aim at being the #1 online resource available for anything related to the Ghost Trick franchise.

The wiki format allows anyone to create or edit any article, so even you can help. Feel free to discover, share and add your knowledge!
What is Ghost Trick: Phantom Detective? 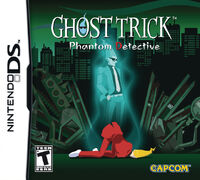 Sissel wakes up in an abandoned junkyard. He witnesses a hitman holding a woman at gunpoint, but Sissel soon realizes that he is dead himself. With a little help from a mysterious lamp named Ray, Sissel discovers he has acquired "ghost tricks" after his death, using which he is able to possess and manipulate small objects in the environment. Unable to save the woman's death, he also discovers that he is able to travel back in time four minutes before her death.

Armed with his ghost tricks, Sissel resolves to recover his memories and find out who he really was and who killed him. He sets out on a quest to solve the many mysteries happening that very night.
The erratic cast that bring this story to life

Missile
Help us improve the wiki! Join the Discord!

If you see this, your JavaScript might be disabled or DiscordIntegrator plugin isn't working. If the latter, please contact a wiki administrator.

Community content is available under CC-BY-SA unless otherwise noted.
Advertisement